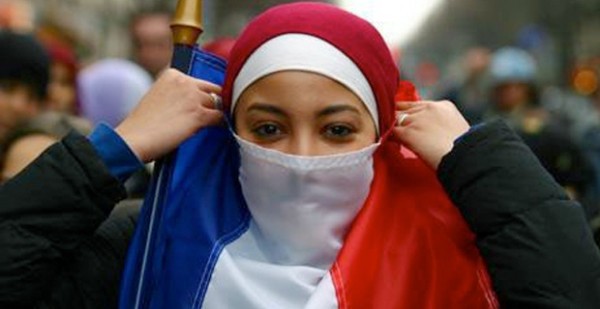 France has the largest population of Muslims in the Western World, making up an estimated 7.5% of the population. The Muslim population has been steadily growing in France since the end of the Second World War, a trend further intensified after the end of the Algerian War for Independence in 1962. Since their arrival, the same question has plagued France: Can Muslims become French? The question presupposes something inherently incompatible between Islam and French society, or that there is something unique to Islam that creates a special barrier to integration. Scholars, such as John R. Bowen, argue that there are obstacles to integration caused by both the French state and French Muslims.1 By creating visualization of space in France, my project, Visualizing French Muslims, aims to contribute novel information to the question of Muslim assimilation in France.

The French government has a tendency to define French people of Islamic origins primarily as Muslim, reflected in the creation of the French Council of the Muslim Faith in 2003. Interestingly, levels of religious participation amongst the French Muslim community imitate the levels of participation found among French Christians and French Jews, and yet the Muslim population is the only group defined primarily by their religion.2

The substantial French Muslim population has endured the passage of two laws that appear to target their religious practice, the 2004 law (banning headscarves and other ostentatious religious symbols from schools) and the 2010 law (banning burqas from any public spaces). These laws could be encouraging animosity towards Muslims, especially those who are visible through the wearing of religious dress. According to Carmen Teeple Hopkins, “from 2008 to 2012, there was a 139% increase in Islamophobic interpersonal acts.”3 Of these acts, Hopkins finds that 77% were committed against Muslim women, and eight out of ten headscarf-wearing women have experienced Islamophobic acts. This indicates a normalization of bigotry bolstered by the two religious dress laws.

The popular media, in both France and the United States, depicts the Muslim population of France as isolated from the general population, living on the outskirts of cities and refusing to assimilate. This narrative is also found in a substantial amount of the historiography on the topic, which often posits that the French Muslim populations are relegated to the low-income neighborhoods on the peripheries of cities, known as banlieues, that are not easily accessible by public transport.4 To probe this inherently spatial narrative, I sought to use interactive maps of the three cities in France with at least 10% Muslim populations—Paris, Marseille, and Roubaix.

Ideally, I would have liked to create maps depicting where French Muslims were living, but French laws made this impossible. Due to an 1872 law, it is illegal to gather data on race or religion. This law became even more strictly enforced with the passage of the 1905 Law on the Separation of Church and State. Thus, there is no available data on the location of French Muslims, or even on exact population numbers. The locations of mosques and private Islamic schools (specifically referring to full time primary and secondary schools) were available, so I decided to use these as a means of spatially placing institutions of Islam in France. I also included Halal restaurants and markets to more fully flesh out the environment of Islamic institutions. If nothing else, the location of these institutions would serve to reflect the degree of visibility of Islam in the cities.

I created the datasets of religious institutions and schools, because I could not find any existing online, in part due to the same aforementioned laws. I used Salatomatic, a comprehensive guide to the locations of mosques and Islamic schools globally, to obtain the master lists of both the mosques and the Islamic schools. To create the dataset, I included the names and coordinates of the mosques. Initially, I was interested in exploring the opening dates of the mosques, and other institutions, to address the common historical narrative that the vast majority of Muslims living in France today migrated recently, since the end of the Second World War. In order to obtain this data, for any mosque whose opening data was not readily available online, I contacted the mosque on Facebook or Gmail to determine their opening data. Unfortunately, not all of the institutions got back to me, and a few did not have visible web presences to contact in the first place. Therefore, the opening dates are included in the datasets and maps, but I do not attempt to make any broad claims based on them. For comparative purposes, I have also included the locations of Catholic Churches and Jewish synagogues, to paint a more comprehensive picture of the religious environments of the cities. I also included the public transportation stops, both bus and metro, with the assumption that accessibility by public transportation reveals some degree of visibility and assimilation.

Overall, the maps tend to reflect farther distances from public transport when comparing mosques with churches. In the case of Paris, the mosques are distributed along the outer edges of the city, with many seemingly inaccessible from public transport. The only mosque that could be described as centrally located in Paris is the Grand Mosque of Paris, which was opened by the French government as a token of appreciation to the colonial Muslim subjects who fought in the first World War. The case of halal restaurants and markets is particularly interesting. In Paris, the bulk of the halal restaurants are centrally located and easily accessible by public transport, contrasted to the halal markets which follow a similar pattern to the mosques. The data source, Zabihah, includes any restaurant that has halal options, thus the restaurants represented are not necessarily exclusively halal, which could explain this disparity. Put another way, Zabihah is a platform designed by, and for, the Muslim community to aid in finding halal options while traveling. Thus this platform does not only include restaurants that are marketing themselves as halal, making these restaurants the only institution featured that is not branded as Islamic.

One potential takeaway is that prior to the 2004 law that targeted religious dress, there was no strong need or desire for private Islamic schools in these cities. In other words, the French Muslims community did not feel the need to insulate their children in a private educational system, which might not be expected of a group deemed ‘incompatible’ with French society. The lack of private Islamic schools until after the solidification of the 2004 law indicates that, at least in the realm of education, the Muslim community shared the same values as the rest of French society; it was only after legislation was passed hat asked some Muslims to choose between education and religious expression that these private institutions emerged. This potentially indicates the fallacy in the narrative of a population that ‘refuses’ to assimilate. This is in line with Jocelyn Cesari’s claim that the top three political issues for French Muslims parallel those of non-Muslims in France, with religion not being particularly important politically to either group.5 The question, then, is not can Muslims become French, but rather will France accept Islam?